Skip to content
I just had an amazing videoing lesson with a Kindergarten class. We are going to make an iMovie about the things that help us to learn. They have been working on this unit for about 4 weeks already so they have lots of knowledge about what helps them learn.

Two years ago we did this lesson with the iPods, but I made the movie.  This year I managed to get the teachers to agree to let the kids build the movie! So when I sat down with the kids I started with, “Are you ready for a challenge?”  They all responded with a “Yes!”.  I told them that we would be making a movie.  They all were very excited.  I let them know that we would take small videos and put them together to make a larger one and that they would do that!

So we discussed what things we need to remember when videoing.  They are usually pretty good at remembering all of the things that I would put on the list.  The usual suspects are: 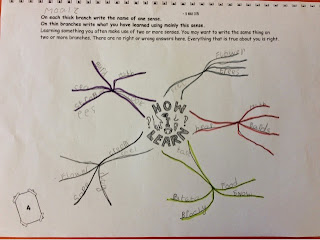 We then started practicing what they were going to say.  This is when their teacher Mrs. Honey brought over the mind maps that they had been creating.  This helped them with preparing what they would say. They all went with their mind maps to think about what they wanted to say.  Then they were to come to me and tell me their sentence.

Once they had their sentence ready, I matched them with a partner and they began videoing.  We quickly realized that the room was too noisy so we all stopped and waited while I called out team names and told them to record.  The kids did an amazing job of remaining silent while their classmates recorded their sentences.

One of the things that I will need to show them next time is to have a bit of time at the beginning and the end of the video.  This helps with the putting it together part, as some of the videos are 2 secs long!