Digital Citizenship as defined by the ISTE Student Standards

“I knew they had heard all the scare tactics before about online safety, and I wanted the workshop to be built around conversation among them, not by me.”

I think that scaring students into acting the way we want, is not an effective way to teach them how we want them to deal with situations. The reason is that you have only told them what not to do. You have not taught them to think about the situation that they are faced with and critically consider their options.

That being said I am not for, free for all let kids figure it out for themselves types of things. I am suggesting that we need to have an approach to teaching students about Digital Citizenship that gives them both some guidelines and strategies to deal with situations. Guidelines or rules like the ones this mother gave her child about their new iPhone are a starting point. What I like about these “rules” are that they address responsibility and habit formation. This parent has thought about how to create good behaviors in her child’s interactions with their phone. So that those behaviors will become habits which will hopefully lead to that child using their phone effectively as a tool in their life.

I think it is also hugely important for students to have a voice. When teaching Digital Citizenship in classrooms I always try very hard to have the students in the class tell me what they should protect, respect and how they should deal with a situation. My Digital Citizenship lessons are a place where I ask students, “What should we do if … happens.” or “How would you deal with … situation?” Students like the girls mentioned in this article about social media rules are generally good about having an idea of what rule would be appropriate.

What I try to do is ask them why that rule and why for that activity. What would happen if the situation changed? How would you deal with it? These questions challenge them to think about more than the initial idea that popped into their head about how to deal with a situation. We all know that you are rarely faced with situations that unfold exactly like an example that you were give unfolded. We have to teach students to think through those situations and decide the best way to handle it. That is a skill that they can use in their lives to manage their Digital Footprint and practice Digital Citizenship.

For example, our school had an Acceptable Use policy for the elementary school that was no student friendly. Because of that, it needed to be revamped. Due to a need to have something that was up and running quickly I started with the Common Sense Media Digital Citizenship Pledge.

For this lesson, I go into a classroom and write the word Digital Citizenship up on the board. I then start by asking the class how they would define those word. Sometimes they know but mostly they are unclear how to answer so we break it down even smaller and I say to them ‘What does digital mean?’ and ‘What does Citizenship mean?’ Luckily because I teach in an international school citizenship is usually not something that takes longer to explain.

From there I ask them what they think it means to be a good citizen in the digital world. When they begin giving their ideas I begin writing them down. Once we end up with a pretty large list, I ask them to start grouping things together. Then we generally get it down to four or five short statements that cover most suggestions from our list. This is the point that I bring out the Digital Citizenship Pledge. I show it to them and I make connections between their statements and what is on the pledge. Nearly always they are able to suggest n

early all of the statements on the pledge. The thing that I like about the pledge is that it has space to add your own, so we look back and their suggestions and we add to the pledge before we sign it.

Since our Acceptable Use policy was needing a revamp, last year I took all of the Digital Citizenship Pledges from my School and I took all of the suggestions that the students had written in on their Pledges. From that, the AAS Student Pledge came about. Our goal was positive simple language that could be understood by all ages. The other thing that we realized is that by doing this we had pretty much written the same things that come up when classes write their Essential Agreements. 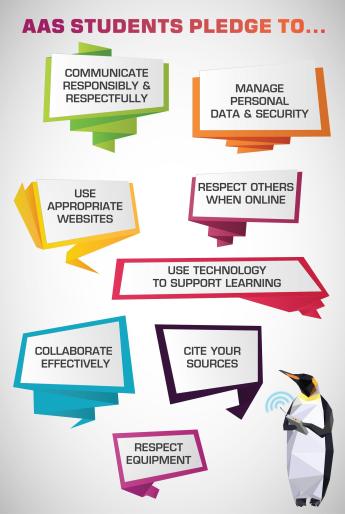 Our future goal is to stop mentioning our Digital pledge as something that is different and separate from the behavior that we generally ask the students to demonstrate but instead embeds the behaviors of the digital world into their everyday normal behaviors.

Today I did the Power of Words lesson from Common Sense Media’s Digital Literacy & Citizenship iBook. The lesson was about how to react to a cyberbully. Part of the activity is for the students to create a cyberbullying scenario and act it out. Record themselves in photos and share it with me.

This is a great activity and I am really glad that I waited until this time of year to do it as the grade three students are mature enough to do this lesson nearly independently. They had a great time with this activity. 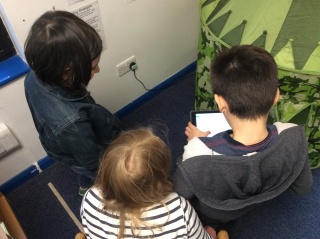 Let’s face it, most kids are not the best organizers. So, to expect them to be responsible for organizing their digital data is not something we can expect them to naturally do.  During the last two weeks of school I worked with all of the grade 3-5 students to back up their work in preparation for next year.
Some are moving, but many are staying so different types of back ups have been needed.  I have been pleasantly surprised that a few kids where on top of the organizing of their data, but the majority had loads of unwanted work still on their iPads and in their Drive accounts.
This got me thinking about my plan for next year.  Backing up and then deleting work is going to become a standard part of all of my lessons. It also has me thinking about what goes into digital footprints/citizenship.  Kids are now creating digital work from PK.  How do we store, share and maintain this work?  Do we even bother with keeping years of digital work?
ePortfolios are going to help give students a storage/sharing outlet.  But how much do we keep of the not “published” work?  Some kids want to keep all of the photos that they have taken from the internet while others don’t.  I find the same feelings applies to their digital work.
This year I will make sure as well that the teachers understand the need for backing up an deleting work so that it doesn’t accumulate through the year.
I was very lucky to be able to sit through a discussion lead by Jim Gamble on ways to educate students, teachers and staff on how to stay safe online by controlling and monitoring your digital footprint. Jim has set up a company (iNeqe) whose aim is to help organizations with digital safety.  I loved the way his company had designed their learning modules.  Each module comes with three ways to interact with the information, perfect in a world where individualised learning and devices are becoming the norm.

They have created a whole series of videos on how to stay safe.  All of the videos are 7 seconds long.  No more having to hear people say I don’t have time to watch that or participate in that.  Who doesn’t have 7 seconds? Safety Centre contains some these videos.  They also have quick reference cards that you can use to remember the steps in the videos.

I gained many ideas not just on digital safety but also on ways to deliver support and help to my staff and students.  I love the 7 second tip ideas.  Making a series of short videos that will allow them to feel that they can accomplish a task quickly and easily. The main complaint I hear with IT related issues is that they are too complicated.  If they can be broken down into small steps that people feel that they can accomplish, then their confidence in using technology will increase.

This is exactly what Jim Gamble is trying to do to simplify digital safety.  By making the steps simple and easy to accomplish he has helped his clients see that there is no excuse for not keeping your self safe using any technology.