I love the times when an idea for a lesson comes together like what happened in my Geek Squad today! As we were walking back to the lab one of the Geeks started stating everything we were doing, that turned into my “coding” while we walked. I was calling out what I was doing as if it were code.

When we got back to the lab I decided to have the Geeks code the school. I gave them each a clipboard, paper and a pencil. Then I gave them a start point and a destination.

They then set off to code their way to their destination. They worked in partners to write their code. 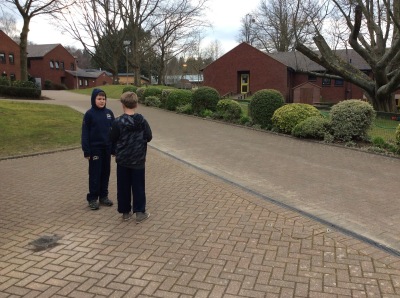 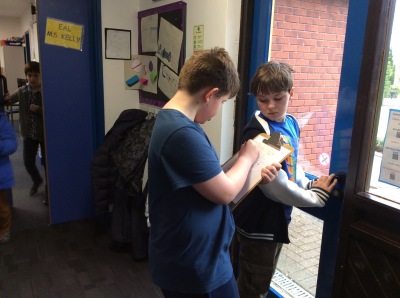 When they came back confident that they had finished their code, I tested it for them! And we found a few mistakes!

Some of them tested their code themselves before they asked me to test it.

While I was testing I spotted one of our grade five students waiting for a music lesson and roped her into helping with the testing process!

When they thought they had their code correctly written I asked them to type them up in a Google Doc. Each group approached the writing of the code differently. As you can see they each approached the “walk” command with a different technique and varing degrees of success!

Then the parents arrived to pick them up. By then I had printed copies of their code. They showed their parents their starting location and off they went! 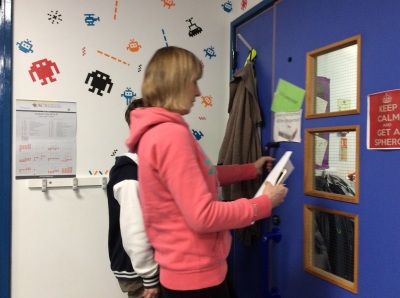 I have to say this lesson has been one that I will remember. It was fun, engaging and challenging for the Geeks. I even had one throw in an “if this, then that” statement into their code!

If I get the chance to introduce coding as a replacement for instructional writing this would be one of my lessons. I also think it would be a great first week activity. You could match the new to the school students up with the ones who knew where things were and send them out to code. Then they could follow each other’s codes.

Yesterday my Coding Club hosted an event for parents. They decided at the beginning of the semester that they wanted to host a Parent’s Hour of Code.

So before the parents arrived they set all of the computers in the lab up on Code.org and had them ready on the Hour of Code page. As the parents came in one of the Coders would grab them and get them started. We had an amazing turn out of parents, teachers, an IT Integrationist, IT technician and even a high schooler!

Here is what one of the coders, Ian, had to say:
“When you first hear about computer coding you think it’s an extremely complicated thing to learn. That is what Ms. Marrs and my dad thought at first. Code.org has made coding simple using blocks that you have to link together. Under those blocks is the computer code. After the Hour of Code both Ms. Marrs and my dad now know that it isn’t as complicated as they thought. I think the Hour of Code was extremely successful.”

It has been one of those weeks where too many deadlines come at you at once. I have been working on getting my Apple Distinguished Educator application in, which involved a two minute video.  I am also working on getting a proposal together for the IB Regional Conference.  Starting my Microsoft Office Specialist online course. Teaching and planning a normal week.  And last but not least finalizing my ECIS Tech Conference presentations!
That being said I will have to say that Wednesday was a great day in the Coding Club! There were students working on many different projects for the hour. The first image is of two girls who are designing a quiz app.  Bina the upper school integrationist came to show them how to use the app designing program that she has been using with the middle and high school.

Next we have a fifth grader who brought in his own laptop so that she could begin to work in Scratch.  He sat for the entire hour with our Computer Coding for Kids book, working his way through the Scratch section. 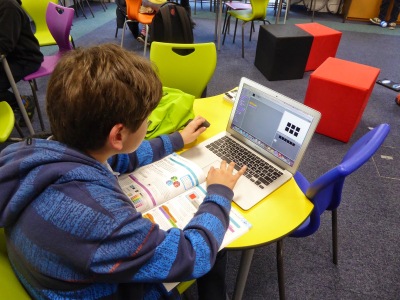 This is another fifth grader who spent some time playing around with Moovly.  She had seen me use them during class and wanted to learn how to make her own.

We have a fourth grader who brings in his Raspberry Pi so that all of the students can work on it if they want.  They spend a bit of time on it then go do something else then come back.  They were trying to figure out how to get Mindcraft working at one point.

I had two boys who spend the entire time trying to get our Ollie to jump things.  This is a bit of one of their attempts to knock the bucket off of the water bottle.

While the Geek Squad and Coding Club do add to my work load, I am always happy and excited after I have had a session to see the kids have so much fun with technology.

Starting in January I will be holding two after school clubs. The first will be a continuation of my geek squad. Many of this year’s geeks are new and could do with another round of geek squad. My second club will be a coding club. I found that my more experienced geeks were getting a bit bored with the geek squad and were ready to move to something more challenging.

I think that with both the geek squad and the coding club I am going to let the kids be a bit more independent. In the geek squad we were able to get a free ride back to Sunrise Care Home because the bus was so late, so we will be heading back to Sunrise to show the residents more technology. Then I would like to do a few more parent sessions with the geeks showing parents both what they know and helping the parent’s with their problems. The integrationist and I are working on anther “Discover Egham’s iPads” event and of course the geeks will help out with that.

In coding club I am going to let the kids try coding in several ways. I am going to get a couple of the Lego Mindstorms back from the high school. I am also going to get them involved with Code Academy. This will allow them to work through coding problems on their own.

I already have 16 geeks and 11 coders signed up so I am looking forward to seeing what comes from next year’s clubs.  I will also continue to think of ways to incorporate coding into our curriculum in an authentic way.

In January I will begin my third session of Geek Squad and first session of Coding Club. I am thinking that I might also start a blog for these two groups. This would give us a place to share cool, geeky things.  It will also be a good place to share our accomplishments within the club.  I was thinking that we could have a weekly tip to help other students.

Each week I could have a different student who is responsible for the post.  Plus any students who have something that they would like share. This could also give the Geeks and Coders a chance to begin to make resources for other students to use.

I am also thinking that I might get one of my “Super Geeks” to help me with the management and execution of the blog.

Keep an eye on this blog for an update on how this goes!
The PD went well today.  I was able to have four of my Geek Squad attend.  They videoed, took pictures, presented and helped teachers.  They were a great hit and were amazingly good sports!

Then Louise Day stood up and showed how she uses Class Dojo in her class to track the healthy snacks that her students bring for their morning snack.  I then talked about how I use Twitter as my personal learning network.  I gave them a very brief overview and showed them how I use pocket when I am in twitter to save articles.  I also shared with them a few of the people that I follow on twitter.  (@caryghart, @Facespics, @mumbaimaggie, @acsintschools,  @SuzanneMcClusk1,  @sherrattsam, @whatedsaid)

We then moved to Lauren Dean sharing how the grade five students apply for apps that they would like all of grade 5 to have. Then back to Jude Vaughan to show Apps Gone Free. This is a great app that occasionally has some very useful education apps.

After all of this we had 15 minutes for teachers to explore one of these in more detail.  This gave the teachers a chance to really look at one of these in more depth and detail. It also gave the Geek Squad boys a chance to help individual teachers get logged into Drive and solve other issues with their iPads. Out of these break out sessions we managed to get at least one self proclaimed “technophobe” on Twitter!  Go Jenny!

Tomorrow I am holding a teacher PD session for the lower school teachers.  I am going to structure it in a similar way to a TeachMeet.  So there will be 10 apps/programs introduced in two to seven minute presentations.  Then at the end there will be two mini breakout sessions where teachers can  learn more about one of the apps that has been introduced.

I originally had about 15 things to introduced but I have cut it back so that hopefully it won’t be too much all at once.  The focus is not an in-depth look at these apps/programs but more of a quick look.  Then if the teachers want to know more they can go to the break out sessions or come to see me later to have a more detailed session.

One part that I am very excited about is that at least 4 of my Geek Squad will be there.  The Geek Squad is an after school club that I am running for grades three through five.  We are looking at computers, ways to help teachers and students and programming.  The students in the club are having a great time spending an hour with me once a week while we talk about coding and computers and all things tech. When I asked if anyone could help out, several offered to skip their Wednesday activities to come to the meeting!

Sweet Tea and IT
Blog at WordPress.com.